But here’s why I say, “I get to go,” instead of, “I have to go.” I get to go because in between all the questions, the anxiety over his interactions with other kids, suffering through his bossiness and unreasonableness, there are moments of discovery.

Byron hasn’t learned there is anything that isn’t interesting. He can occupy himself with a copse of grass. He spent five minutes yesterday marvelling at a drowned beetle. He felt like the luckiest kid on earth because he found a penny, and when he found a second he left it there: with one, he had all the riches in the world, and the second penny should make another kid’s day.

I wish I could say it was as easy as being with a child to see the world through his eyes, to transcend my grown-up jaundice and worldly concerns, and to delight in a dragonfly, but it’s not that easy. But then, sometimes, it is. When you have tuned yourself to him, when you have allowed yourself to take an interest in his interests, you can suddenly be thrilled by the sight, in the sky, in the distance, of a man on a cherry picker fixing a wire. You can follow an ant for several minutes. You can watch a grasshopper with the same fascination as you watch an exotic zoo animal.

You can celebrate, with him, when he finally finds the right combination of shifting weight and leg pumps to make the swing swing on its own, to feel the same flush of pride, and be glad he stops a moment later and asks you to push him, with both hands. 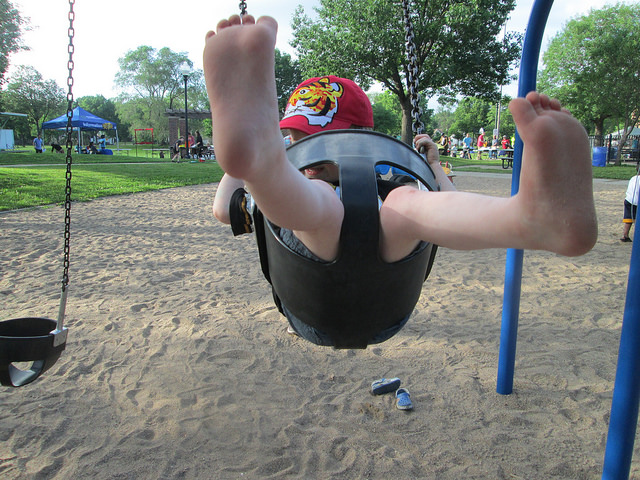