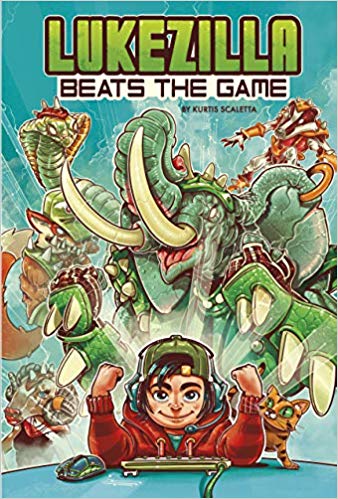 In real life, Lucas is small and unathletic. But as Trunkzilla in the online game Smashtown Frenzy, he’s the biggest, toughest fighter on the streets. No wonder he prefers games to real life! He plans to spend all summer battling his way through the Smashtown tournament with his team, but his parents have other plans for him: volunteer work. Lucas signs up to be a Senior Sitter and gets matched with a cool old librarian named Isaac who likes cats and detective novels. Mornings with Isaac and afternoons gaming are working out great until Lucas’s Smashtown success hits a speed bump and Isaac’s health takes a tragic turn. Lucas saves Isaac’s life but then finds himself burdened with a new sense of moral responsibility that gets him thrown off his team, banned from Smashtown, and made into a meme for internet haters. Some reward for being a hero! Lucas has one last shot to prevail, win back his friends, and show his parents how much gaming means to him.

Follow Rafael and Maya in a story that shifts back and forth in time and place, from Rafael’s neighborhood in the Dominican Republic to present-day Minnesota, where Maya and her sister are following Rafael’s first year in the minor leagues. More…

The Winter of the Robots

There’s something lurking in the junkyard in Jim Knox’s neighborhood, and it’s up to him and his friends (and science-fair rivals) to put their robot-building skills together in order to defeat it.  More…

When a giant glowing fungus encroaches upon thirteen-year-old Eric’s small town, he, his little brother Brian, and a runaway girl try to stop it–and figure out what happened to the Puritan town that had mysteriously disappeared from the same spot. More…

After moving with his family to Liberia in 1982, twelve-year-old Linus discovers that he has a mystical connection with the black mamba, one of the deadliest snakes in Africa, which he is told will give him some of the snake’s characteristics. More…

For twenty-two years, since a fateful baseball game against their rival town, it has rained in Moundville, so when the rain finally stops, twelve-year-old Roy, his friends, and foster brother Sturgis dare to face the curse and form a team. More…

The Topps League series follows Chad, the batboy for the single-A Pine City Porcupines. Chad wants to the Porcupines to prevail, and dips into his massive (some say, magical) baseball card collection to help the players. More…

When Jackie Robinson stepped up to the plate for the Brooklyn Dodgers on April 15, 1947, everything changed. He was the first black man to play in a major-league baseball game in the twentieth century! His brave act opened the door for more black players to achieve their own big-league dreams. But how did Jackie break baseball’s color barrier? Whether excelling at every sport he tried as a youngster or standing up for his civil rights as a soldier in the US Army, Jackie always focused on his goals. Find out how this boy who loved baseball became one of history’s greatest trailblazers!

Trailblazers is a biography series that celebrates the lives of amazing pioneers, past and present, from all over the world.

My essay “Bully on the Ledge” is included in this anthology of authors talking about their experiences with bullies and bullying. More…