The wilderness abounds with monsters that take many forms, some never imagined by storytellers. . . . 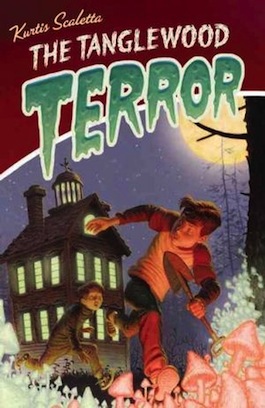 When thirteen-year-old Eric Parrish comes across glowing mushrooms in the woods behind his house, he’s sure there’s a scientific explanation. But then they begin to encroach on the town, covering the football field and popping up from beneath the floorboards of his house. It doesn’t take long for Eric to realize something’s seriously wrong. Not that much else has been going right: his parents are fighting, leaving him to babysit his annoying little brother Brian, and he’s had a falling-out with his football team—over a pig.

Then Eric meets Mandy, a runaway girl from the nearby boarding school, who warns Eric that the fungus could portend the town’s doom, leaving it in rubble—just like the village that disappeared in the exact same spot over two hundred years ago. Halloween is approaching, the fungus is spreading, and Eric, Brian, and Mandy set out to solve a very old mystery and save the town of Tanglewood.

Kurtis Scaletta offers a glowingly eerie tale of friendship, family, and the strange—sometimes terrifying—things lurking in the woods behind your house.