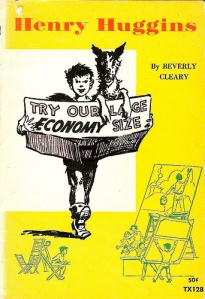 In the introduction to the fiftieth anniversary edition of Henry Huggins, Beverly Cleary describes sitting down to write what would be her first book. She remembered the boys who used to come into her library and ask, “Where are the books about kids like us?” That was the 1940s, and apparently not many had realistic and imperfect kids, but paragons of the Horatio Alger stamp or fearless adventurers like the Hardy Boys. Cleary decided to write a book about kids like them — city kids without much money — and Henry Huggins was born.

Henry is less developed than Ramona, at least in book one, and Cleary is a less developed writer: Henry doesn’t have the same fine-tuned wit as Ramona, his experiences don’t have the same poignancy, and the book is so much a novel as a collection of stories. Still, there is still a fine, minimalist style and buoyancy that any children’s book author can learn from. While reading I kept in mind that it was a revolutionary turn for a children’s book to have such benign realism, and admire how Cleary is able to give such stories urgency despite the lack of high stakes (to use the fiction-writer’s lingo).

Oh, how I miss books like these, and how I miss childhood like that experienced by the kids of Klickitat. Henry has a lot of autonomy for a city kid who is about nine in the first book, handles his own meager finances, and makes his own fun. His parents give advice and assistance but don’t manage his projects for him. In one chapter they even let him go out at night, unsupervised, to catch worms — this in an urban setting (Portland, Oregon). It’s striking to read about kids who are so independent, and parents who are so trusting. I enjoyed a childhood somewhat like Henry’s, and in fact was inspired by this book to attempt my own nightcrawler hunting business (I caught a lot, but well shy of Henry’s 1300).

I am also struck by the differences in the economics of kidhood. There’s nary a chapter where Henry is not counting pennies. He saves up for small things like footballs or guppies, and while his parents support these endeavors, they don’t buy him stuff willy nilly. The families in both the Henry and Ramona series are thrifty. Nobody would describe them as poor, but they save up for small pleasures and live on tight budgets. They economize and improvise: When Henry has fish, he keeps them in a gallon pickle jar and moves fish with a net made from his mother’s nylons. Even the pets are less spoiled. When he later has pet store credit, he doesn’t know how to use it — his dog has a collar, a leash, and a dish, and that’s everything he needs. Compare that to the pet beds, snacks, and pile of chew-toys of American doghood in the 21st Century.

So the “book about kids like us” may seem exotic to readers in the 20-teens. Based on reviews and gatekeeper feedback on my own books (which typically have Hugginsesque kids off doing stuff on their own), the idea has really taken hold that kids don’t do anything unsupervised (no sandlot ball, and no kids building robots on their own, I’m told). It also seems like even less well-off kids have a load of toys and routinely get for-no-reason presents that Henry would have had to save up for. Well, OK, those assumptions are informed by race and class, but it’s hard to deny that I had more freedom and less stuff than kids of the same middle-class white backgrounds do now. I think Cleary herself mentions that in her New York Times interview from a few years ago.

Wouldn’t kids trade the stuff for the liberty? I know I would have. In fact, as a child I rarely fantasized about things or organized activities. I fantasized about minor adventures like Henry’s, and friends like Henry’s. Even if the modern, pampered, plugged in, and helicoptered kid finds Henry less “relatable” (to use a contentious word) than kids of my era, I hope they’ll be enticed to hunt nightcrawlers or adopt a grubby stray dog on the spot.

One thought on “Henry Huggins”