Jim is tired of being the sidekick to his scientific-genius, robot-obsessed best friend, Oliver. So this winter, when it comes time to choose partners for the science fair, Jim dumps Oliver and teams up with a girl instead. 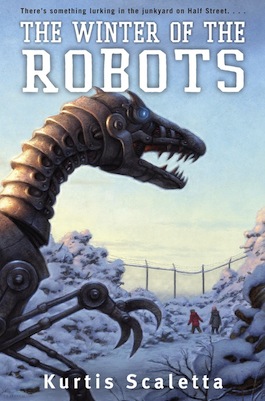 “Rocky” has spotted wild otters down by the river, and her idea is to study them. But what they discover is bigger—and much more menacing—than fuzzy otters: a hidden junkyard on abandoned Half Street. The place gives Jim the creeps. There are sudden crunches of metal, pieces of trash shifting in the icy wind, and the deserted ruins of a scientific corporation that burned down years ago. But as desolate as it may seem, there’s something living in the junkyard. Something that won’t be contained for long by the rusty fences and mounds of snow. Can Jim and Rocky—along with Oliver and his new science-fair partner—put aside their rivalry and unite their robot-building skills? Whatever is lurking on Half Street is about to meet its match.